When George (n.c.i.*) first came to us in September and declared his deep desire to be a girl we, with the exception of our most intimate relationships , kept it under wraps. We did so for many reasons: shock/fear/anxiety, hoping for a little bit of time to create a new reality, wonder over its “legitimacy” and, frankly, ignorance as to how to move forward. In our numerous consultations with his therapist the recurring message was that we were just along for this ride and the lead was not ours to take. No sooner had those words been uttered than George (again, n.c.i.) made the announcement (without our knowledge) to one of his teachers at school. That day has heretofore been referred to as the day that the cat was out of the bag. It was December 12, 2011…the day after Jessie’s (n.c.i.) birthday. Profound, right?

Now thrust into a point of no return we started with the first of what would become numerous meetings with administrators, teachers, psychologists and guidance counselors at the school in an attempt to work together in a timely (but not knee jerk) manner and figure out how to work with and disseminate this new information in the least chaotic way possible. It took countless conversations, phone calls, consultations with anyone who knew anything, letter writing, wordsmithing and scripting but in the final hours of a Friday afternoon in the fourth grade, the classes were each met with and told that George was now Jessie. That day is known as the day that horse was out of the barn.

So here we are now, about a month since the official announcement at school and everyone in the community who knows about the change has taken it in and moved on to whatever they have going on in their own lives. The initial shock is gone and, while I am sure there is chatter on the playground and at the local Starbuck’s, the transition has been shockingly seamless. So the worst (in terms of letting people know) is over. Right? Wrong.

Every single day, assuming I leave the house (which I do. everyday) I am burdened with a concern over who I might bump into that falls into any number of different categories: they don’t know (but wonder why George (n.c.i.) is next to me dressed in pink and has hairclips to match), or they’ve heard something but don’t know officially, or they know but are too awkward or embarassed to bring it up, or is a person I have known for years and is not anyone that I feel I need to tell, but somehow I do. This happened just the other day. I was at gymnastics class and saw a woman I have known since childhood but see primarily on Facebook. She knew all about George (n.c.i.) from my various status updates quoting him and his ongoing hysterical banter and impressive works of art. She even commented on what a funny son I had. All the while I am growing increasingly anxious with the knowledge that Jessie (n.c.i.) is about to come bounding out of the class, hairclips hanging, sweat dripping and elation oozing leaving me with some explaining to do. Feeling no other option, I, as matter of factly as possible, brought her up to speed. Because transgender stuff is so fraught with emotion, I had to make a conscious effort to keep it short and sweet which, of course, I failed at miserably. Twenty five minutes later, with my arm being tugged by a certain ten year old who was ready to go home, I was still in conversation with a perfectly lovely woman who never, in my wildest dreams, would be on my short list (or any list, for that matter) of people I felt a need to share this information with. Yet there I was.

I’m one of those people who seems to know everyone and, while most have six degrees of separation, I seem, for reasons unknown, to have about two degrees. I happen to have a good memory for both names and faces and have been known, on occasion, to start conversations with random people who have gone on to become friends. I’m not sure if it is a gift or a burden. I am sure, however, that it has put me in a position that, at every turn, there is someone I see or think of that I “really should tell” what is going on, yet I simply cannot. (Note: my inability speaks to the sheer number of people, not any issue I have with the information. I’m so over that part.)

All this brings me to my latest burning issue: the cat sneaked out of the bag and the horse barreled out of the barn. Is it time now to go fully wide and officially blog about this? My initial email distribution list started off with under a dozen people and is now north of fifty yet there is something holding me back. Some of my most trusted advisors have weighed in about tossing this out there for public consumption, yet I remain conflicted. Any and all opinions are welcome.

Finally, here is a blurry picture (people kept walking in front of me and then Jessie caught me about to take it so turned away, wrecking the fantastic moment) that I took yesterday at gymnastics. 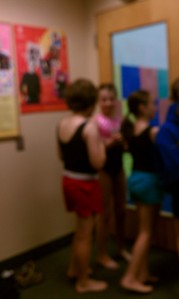 That is Jessie (with her back to the camera. Stinker), hanging with two other girls waiting for class to start. The girl in pink had just greeted Jessie with a “hi, Jessie..I like your hair that way” making her my new hero. A small, but happy moment.