Jessie has boldly, and without wavering, long declared a dislike for the beach.  Even when she was a little kid (when, I might note,  we were fortunate enough to have the luxury of a family house literally on the beach) “George” would be good for about twenty minutes and then be done, preferring, instead, to hang out on the porch or in the yard.  I never minded, really, because, truth be told, I am not a huge fan, either.  But let me explain: I love the sound and smell of the ocean, I even like walking on the beach.  It is the sand that I hate.  It is the lousy gift that keeps on giving – mostly taking up residence under my fingernails mocking me for days on end.  My disdain for sand was so well-known that the other families that shared our “private” beach area used to tease me when I would arrive by snarkily (yet lovingly) reminding me that there was still sand on our little stretch of beach so I had might want to think of finding another spot.  As such, my wanting to just see the ocean coupled with both Jessie’s and my dislike of sand resulted in not making our way to the shoreline all summer.  Until today. 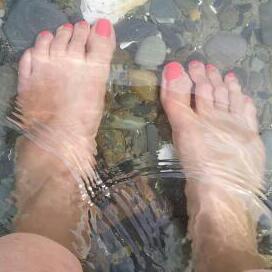 After lamenting in my last post over missing just a quick siting of the ocean,  I decided that today was the day that I was going to get Jessie into the car, destination unknown (to her, that is) and road trip.  That house which Rich’s family owned for better than forty years (until selling it about five years ago), is a mere 45 minute drive from my house and the beach with which I am the most familiar so  Jessie and I hopped in the car, opened the sunroof, turned on a mutually agreeable radio station and hit the road.  As she continued to inquire (relentlessly) as to where we were headed I continued to ignore her query.  All I wanted to do was to see the ocean. Hearing it would be a bonus.  It wasn’t until she began to recognize some of the landmarks along the way (which surprised me) that I had to fess up.  My admission was, not surprisingly, met with displeasure.  Argh.

Once we turned the corner and saw the water which was filled with people who were more than waist deep, her attitude began to change.  She had spent enough time there as a little kid to know that the days that the water is warm enough to go in without turning blue were few and far between and the vision of more than a few people in past their ankles confirmed that today was one of those days.  She turned to me for confirmation that I had thrown a bathing suit in the car which, of course, I had not.  (Remember: she hates the beach…and my only goal was to see it!) As I continued driving past the public beach (after having been going there for 25+ years there was no way I was paying to park there…) and heading back towards where “our” house was, she grew increasingly excited and insistent that I turn the car around, go home and get a bathing suit.  Resolute in my decision to just look at the water, I reluctantly parked (illegally) in front of the old house and followed Jessie down to the beach.  When I saw, there on the private beach where the swimmers having a higher metric by which they judge the acceptability of the water temperature, a far greater than normal number of people actually frolicking in the waves, I agreed to see if we could buy a bathing suit in town…but only if I could find a spot directly in front of the store.

Being blessed with exceptional parking karma has its downside: I indeed found a spot directly across from a cute little store that I believe is new to the area since I have no recollection of ever having seen it before.  We went in, found a suit that fit her perfectly, added a cute pair of gym shorts with the beach name emblazoned across the butt (remember…we have to conceal that which indicates to the world that she has parts other than one might expect) and headed back to the water.

When we pulled back onto the street, I noticed that an additional car was in the driveway of “our” house that had not been there fifteen minutes earlier. It made me think (I am so clever) that someone had just gotten home.  So, (and anyone who knows me in real life will not be surprised by this), I knocked on the door, introduced myself and asked if they minded if I parked in front of the house.  (Since this is the private beach for residents only, the town police are very quick to tag cars that don’t seem to belong.  I really did not want to get a ticket.)  And, (again, IRL people will not be surprised to hear…) since I was halfway in the door already, I asked if I could see what she had done with the house.   She could not have been more gracious and proceeded to give me a top to bottom tour – the highlights of which included a fabulous kitchen, a new master suite, two additional full bathrooms and a sun shower in the back.  In short, she did everything that we all used to sit around and fantasize about, but, with a desire to remain true to its beach house status (and, frankly, not spend the crazy amount of money that it would require) never did.  The house looked amazing and different enough from the house we spent so many years in that melancholy did not set it.  A little bit of envy, maybe, but not melancholy. 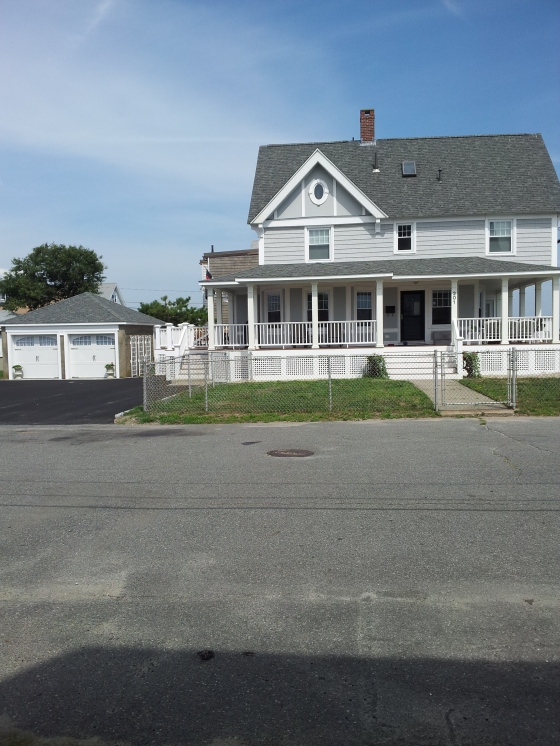 Fresh off our tour, Jessie and I headed to the beach where she was, within about fifteen seconds, in the water (in her new suit) working her way into the crowd of a dozen or so tweens and teens who were all valiantly trying to boogie board on what looked to be several copies of the same yellow boogie board.  As I was in shorts and a tank, I lingered by the water’s edge, trying to determine what was being said and to assess how she was doing.  When I noticed some kids rolling their eyes and shrugging their shoulders, I grew concerned and summoned her back to shore which, not surprisingly, she ignored.  I did wonder to myself if she had “shared” (as she did for no apparent reason at the pool earlier this season) but because she couldn’t hear me over the surf (or something like that) I could not tell for sure.  When she did come out, just a few moments later, she assured me (before I even had the opportunity to ask) that she had not “told them my secret.”  We then walked for a few moments, gathering the best of the shells and rocks until she announced that she was done.  See?  Twenty minutes were all she needed.  Man, would I have been pissed if I had lotioned, blanketed and suited up for that.

By this point I was starving and suggested that our next stop be a celebrity hamburger joint one town over.  She, of course, balked and said she didn’t want to go.  Firm in my resolve to have a day trip adventure, I denied her any choice and headed to my next destination.  Once again, my parking karma was exceptional and we got a space directly in front of the entrance.  We walked in and were escorted to a table by a hostess whom I would soon learn, was named Alyssa.  She was adorable and Jessie was quick to engage her in conversation.  In the time it took me to excuse myself to the restroom to wash my hands, they discussed the gems on the nape of Alyssa’s neck (which, we learned, can only be surgically removed), her many tattoos, her insanely bright blue eyes as well as Jessie’s artistic abilities, love of “Project Runway”, desire to matriculate at Parsons School of Design and her support of “non-visible when clothed” tats.  We indulged in delicious burgers and sweet potato tater tots (which, incidentally, are out of this world) and continued to banter with Alyssa.  The meal ended with a hug between new friends and a promise from Alyssa that if the next time we come there is a line to make eye contact and she would hook us up. 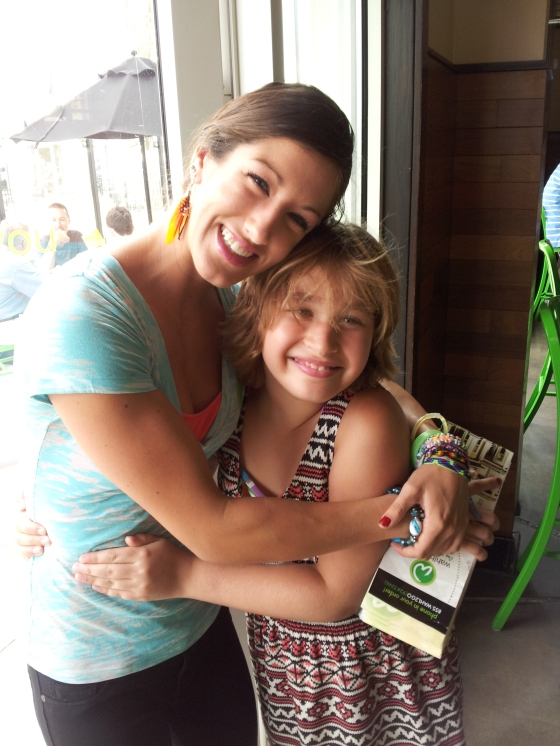 Still in need of more summer experiences, I hoped to myself that the Dairy Queen which I recalled being on the way home was still there.  Guess what?!?!  It was!  We pulled into the parking lot with Jessie declaring that she was stuffed and my (being the great mother than I am) telling her that one could and, more importantly,  should, always make room for ice cream.  She very quickly agreed and we opted to split an Oreo Blizzard.  Yes, they are as good as you recall.  Armed with two spoons, we went back to the car and watched a babysitter try to wrestle her four charges into the car and off for their own adventure as we inhaled our frozen confection.   From there we headed in the direction of home.  As we were driving we both settled into our own food comas and I commented that I could not believe what we just ate.  Jessie’s response: “that, mom, was being in heaven.”

And, for the first time in a very long time, I would say that indeed, she and I were in heaven today.  We both got just enough of the beach, a delicious lunch complete with a new friend, delectable dessert and smooth waters all around.  I don’t think I even have any sand under my nails.

When we arrived back home I asked if she wanted to head to the pool.  “No, mom.  Today was already perfect.  Let’s not mess with it.”

22 thoughts on “A Little Slice of Heaven”