It might have been the lousy post-haircut blow out.  Or maybe the threat of another N’Oreaster.  It could also have been the fact that I shut the tail of my light-colored sweater/jacket in the door of the car and did not notice it until twenty filthy miles later.  Perhaps it was the discovery of a crack in the bumper of my car (which I swear I did not cause).  Most likely it was the hot curlers.  Yep, I am pretty sure it was the curlers that sent me spiraling down. 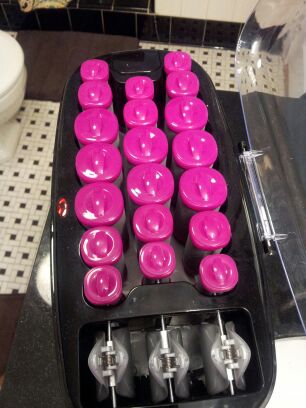 When Jessie and her friend Sarah were, with my knowledge (my encouragement, even), coiffing one another, the curlers bothered me not a whit.  The visual of Jessie’s overly curled tresses didn’t do it, either.  It was when, after Sarah had left, (generously leaving the curlers here for Jessie’s pleasure) and I was invited (without the option of graciously refusing the request) to the bathroom to watch Jessie transform her hair from straight to curly that I felt it wash over me.  Anguish. Distress.  Sadness.

I am not proud.  I feel guilty even acknowledging that the visual of my male born daughter joyfully working with hot pink curlers shook me to my core.  Her obvious glee upon removal of each clip freeing the curl should have made me happy for her.  It did not.  It felt like a crushing blow to my chest.  And I feel horrible for my reaction.

It was so utterly girly, so unabashedly female and so hard for me to watch.  A (fairly significant) part of me wanted to slide my arm across the bathroom counter, knocking the pink tubes to the ground in a flourish.  I fought the urge to pull the plug out of the wall and disallow their use at all.  And, after serving as a model with half my head rolled into clips, I consciously rammed my shoulders down from my ears attempting to put them back in their proper spot.  Oblivious to my inner turmoil, Jess commented on how fabulous my hair looked curly (not to readers: I have naturally curly hair) as she circled around me in a (vain) attempt to curl the other side.

I couldn’t take it anymore.  I needed to be out of the bathroom, away from the insanity and, ideally, in a corner somewhere sucking my thumb.  But, alas, that was not to be.  I took a deep, cleansing breathe (the one thing I learned in childbirth classes) and announced that this model was officially off the clock as I made my way out of the confines of the bathroom, seeking breathable air.

Interestingly, my departure coincided with Jessie’s boredom with the project.  Within moments of my descent to the safety of the family room she was at my heels, having combed out the curls of only moments before.  Her mood was just as I had left her, and she was none the wiser to my mini breakdown.  Happily watching television, munching on a Creamsicle with hardly a trace of curls remaining, Jessie remains oblivious to my personal crumbling.  For that, I am grateful.

I never know what it going to trip me up or send me looking for the nearest sedative.  Who would think that something as benign as stupid pink hot rollers would be my undoing?  Lesson learned…the hard way.

Note to self: I can do this.