For the most part, I am (fairly) at peace with George’s transition to Jessie.  It would be dishonest to suggest that it is easy, that I fully understand it or that I do not worry about where she will land.  I have gotten used to the long hair, the girly accoutrements and the abundance of pink.  When I look at her, I generally see a girl, although admittedly, there are times that I see my little boy George.

I admit that I still struggle, however, with her name.  Anyone who has a child knows what goes into naming them.  With each potential moniker we assess everything: the initials and what acronym they may spell**, the possible nicknames –both good and bad, the cadence of the first, middle and last names together, the meaning of the name, the person for whom they are named.  You make the decision, fill it in on the birth certificate and commence a new life.

George was named for my paternal grandfather whom I adored.  (And, it is worth noting, I was, without question, his favorite).  Rich and I found it alternatively cool and a wee bit funky that we would have children George and Harrison (who, by the way, was named for his grandfather, Harry) and have (many, many times) been asked if we were big Beatles fans.  We considered other “G” names (in keeping with Jewish tradition), but none seemed to fit this bright blue-eyed child as well as George.  It was not long before George morphed into Georgie; a name that so perfectly suited him with his strong spirit, high energy and take-hold-of-the-room personality.  I loved his name.

And then he went and changed it.

When, nearly two years ago, George tearfully told me that he “had always wanted to be a girl” I vividly recall thinking to myself that “she” (early in the game, she required quote marks) could still go by Georgie…it would work, be cute even.  But he* was having none of it.  Shedding his male persona would, in his* mind, not be complete without a name change.  It was crushing.

At first, the names bantered about (much to my horror) were those I would call “ridiculously female”: Ashley, Brittany, Amber, Tiffany.  Nice enough names, but none that I would ever consider for my daughter – even if she had been born with a vagina.  I had to be careful, though.  I had to be supportive.  I had to try to sway his* thinking to something more palatable to, well, me.

I cannot honestly recall how it was that we arrived at Jessie, but I do know that there was much discussion as to how it would be spelled.  I (at the suggestion of my brother) was angling for “Jesse” – it somehow seemed more androgynous, although, in hindsight that sounds ridiculous since it is highly unusual upon meeting someone to inquire if there is an “i” in the spelling of their name.  Regardless, she* wanted the “i” and I was wise enough to know that I would have far greater battles to face thus making going to the mat on this one was a colossal waste of everybody’s time.  So, Jessie it would be.

And now, over the past two weeks, I have been (a little more than slightly) tortured by this (not quite so) new name.  First, Kate and William went and named their little heir to the throne George.  And if that wasn’t bad enough they publicly announce that he will be called Georgie.  Hey!  That was my nickname for my kid!  (When I relayed this information to Jessie, her eyes widened, her mouth dropped open slightly and she said with just an air of irritation, “hey! I started that!”…to which I responded – in my head – wtf?!?!)  And then, Jessie unearthed a blanket emblazoned with the name George – a throwback to Harrison’s bar mitzvah (nearly six years ago!) when I gave each kid a blanket with, yep, their name embroidered on it.  I’ve not seen that grey fleece throw in years…where the hell did it suddenly come from??  And what will be next?  Will George H.W. Bush die prompting 24/7 news coverage? Will Boy George be arrested (again)? Will Lake George overflow?  Will George Clooney end his lifelong bachelorhood?  Will George Washington get a facelift over on Mt. Rushmore? Will George Foreman have another child and name him George?  Will I never be able to escape the reminder of George – in all incarnations? 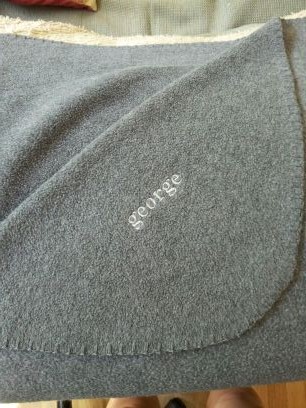 It is just another of the many little things that trip me up, catch me unaware.  It is getting a little bit easier…but I do hope that all Georges lay low for a while.

** I have a dear friend whose married name make her initials JEW.  Cracks me up every time I see it.  (Love you, JEW)