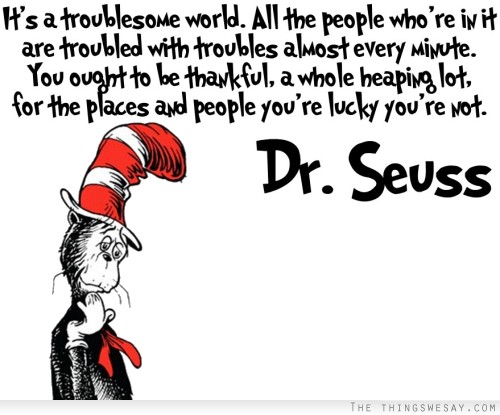 All the best wishes for a Happy Thanksgiving, a Happy Hannuka, a Merry Christmas and all good things in 2014.

Oh, and I am grateful for Dr. Suess — he had it going on.

I arrived home from work today to spy two oversized envelopes leaning between the screen and front doors of the house.  Since my mail is put through a slot in the door, anything that cannot be shoved through the narrow opening winds up there. I hadn’t ordered anything, so could not imagine what the packages contained, but will admit to a little trickle of excitement that perhaps someone sent me a little something just because I am swell.  No such luck.

With the two 8” x 10” padded envelopes tucked under my elbow, I maneuvered myself and my personal belongings into the house, bent down to gather the mail that lay on the floor in the foyer and called my hellos to Jess.  As I dumped everything onto the kitchen table I looked at the first package and saw that it was addressed to Harrison.  Well, his birthday is coming up, so perhaps it was a gift for that.  Then I took at look at the second (and, I now realized, identical) envelope and saw that it was addressed to George.  Return address: Amazon.  Contents: Likely gift cards. Very personal (note sarcasm) gift cards.  And then, if you want the truth, I got pissed.

I knew immediately who the mailings were from.  (Don’t ask me to share…I will not.) And, I also immediately knew that they were not a birthday gift, but a Hannukah gift, one for each of my children…one of whom has not been addressed as George in nearly TWO years.  It infuriated me.

I can understand the occasional slip up with pronouns. It happens.  I can understand periodically starting to say George (this usually occurs when said child has done something which results in any adult’s need to address her, shall we stay, strongly). It, too, happens.  But sending a gift which, one would hope, is supposed to carry some degree of thoughtfulness (it is a gift, after all) and using the wrong fucking name?  I simply cannot understand that.

In fact, I will go one step further.  I would go so far as to call it cruel, thoughtless and insulting.  I would like to (and even tried to) believe  it was an innocent mistake, but given the fact that the same “mistake” was made last year at this time, I am less willing to cut slack than I might otherwise be.  One could argue that if you are so generous (there’s that sarcasm again) as to send a gift, you should also be generous of spirit and get the kid’s name (and, actually, gender) right.

I doubt that the person who was so callous in their “generosity” will even see this, but calling them out on my blog makes me feel just a little bit better.  If they do happen to see this: An obligatory gift is neither necessary nor appreciated.  A modicum of interest in Jess would be far more meaningful.

This afternoon a seven-year old-boy who has only ever known Jess as Jess (read: hasn’t a clue that she is not your “average” girl) was perusing the photos on my refrigerator door.    He asked who different people were: the responses of “that is my brother”, “she is my oldest dearest friend”, “he was my dad” all came easily.  “Who is this little boy with Harrison? He looks like Jess”…aw, shit…not so easy.

I took advantage of the seven-year old’s naiveté and explained that the little boy was a family friend which, thankfully, he bought.  As the words came out of my mouth, a wave of nausea swept over me.  I suddenly felt dishonest, disingenuous and a little bit disgusted with myself.  I had lied to a little kid, disrespected my child and put my needs (which I was not even entirely aware of) ahead of my kid’s.  I suck.

Within moments of the child leaving the house, I frantically removed all the photos from the refrigerator door, not just the ones displaying George.  Among the shots that had greeted me every time I opened the door (which is often) were my dad laughing his head off (a photo I have shared here), my grandpa holding my three-year-old hand in front of the house I grew up in, George and his piercing baby blues and one of Harrison, at three, wrapped in a talis at Hebrew school.  Now they are all packed away in a box for safekeeping…too hard to look at any more.

Yes, I am that mother of a transgender child who still displayed photos of her MtF child in his (gender choice intended) original iteration.  Admittedly, I had not updated, or changed any of the pictures in the nearly two years that have passed* since George transitioned to Jessie; it gave me comfort and, if it bothered Jess at all, she never mentioned or even alluded to it.  (In my defense, while I have tons of photos of Jess, they are almost entirely digital…not a single glossy 4”x6” exists.)  It all represents, I am realizing, a not entirely subconscious attempt to somehow keep my little boy around.

I was spared having to explain (to Jess) the clearing of the fridge.  Over the past week or so I have been de-cluttering to within an inch of my life, so the fact that I was neatening yet another space did not strike Jess as odd.  In fact, she even offered to 409 the door for me, making way for an impressive magnet display.  If she questioned my motivation, she did not let on as much.

As we near the anniversary of Jess’s (or is it George’s?) transition, I am admitting to myself (well, to you, I guess) that she is not the only one with ambivalence.  Clearly I, too, am not entirely on board; not for any other reason that a mother’s intuition that her kid is, well, ambivalent.  I still stumble when people ask me about my children, often referring to Jess as my “little one” (technically she is, being a full seven years younger than Harrison) and rarely as my “daughter”.  When new acquaintances ask about my children, I have a ping pong game in my brain, trying to figure out what to say…since my instinct is “two boys”.  I usually see a girl in front of me, but often am struck by how much of George is looking back.  And, as I have said before, it fucks with your head.

As for the seven-year old, I do wonder what will happen if Jess ever decides that she wants to be George again and how he (the seven-year old) will react.  Kids are pretty resilient and forgiving of this stuff, but I will still file under: stuff I never thought I would have to worry about…

*Can you believe it has been nearly two years?!?!