Last night I had a discussion with someone dear to me who, without judgment or criticism[i], asked me why everything to me is either black or white.  Why, they inquired, am I so thrown by the grey in life? It was a fair question:  In my world you are in or out – never somewhere in between.  You (or, as the case may be, I) are elated or despondent, grossly fat or irritatingly thin, wildly interesting or painfully dull, smart as a whip or dumb as a stump.  That is, indeed, the way my mind seems to work.  It is not a good way to be…particularly when you have a child who is terrifically gender fluid.  And you are hitting (okay, well into) middle age.  And you are trying to navigate the world in a new iteration.  Nope, not good at all.

Historically, in an attempt to avoid setting myself up for failure, I have not set (let alone announced) New Year’s resolutions.  Why, you ask?  Well, in my black and white mind the only two possible outcomes are raging success or devastating failure. The thought of partial success (or, for that matter,  failure) doesn’t work for me.  I need more control than that.  (Yeah, right, like any of us have any control over anything.) (I actually believe this has something to do with being an Aries.  No, seriously, I do.[ii]) This year, however, I kinda, sorta have a resolution.  I want to learn to not only manage, but, gasp, thrive in the grey area.  There, I said it.  Damn. 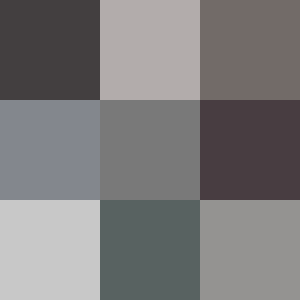 Years ago, my sister in law, in preparation for her first marathon, went out of her way to tell everyone who would listen that she was in training.  I recall her telling me that she did that to keep herself accountable, in check and focused.  Her thinking was that if she announced her intentions to the world it would be way harder to bag the whole thing. [iii]  I can pretty much assure you that I will never train for a marathon, but, truth be told,  my establishing comfort with “the grey” will feel, emotionally, anyway, like more of a triathlon.  That said, I am (bravely) putting it out there so that anyone who is on the receiving end of one of my hysterical “it is grey and I cannot take it” episodes will gently, kindly and with love, talk me off the ledge and remind me that everything is not, indeed, black or white.

Back when Jess’s transition began, one of the gender specialists that I met with told me (and would tell me many times over) that I had to learn to live with the ambiguity.  My admission that maybe I didn’t want to was met with a courtesy chuckle and an implied kick in the ass.  No choice here.  This is not black and white now, will not be black and white tomorrow and may, in fact, never ever be black or white.  It is, in all likelihood, going to be grey for, well, ever.  And not the same shade of grey, either.  Sometimes there will be blue undertones, sometimes green.  It will shift from charcoal to heather to silver to slate to platinum to ash to aluminum and back to charcoal with fierce regularity within one day.  Or, as my luck would have it, in the span of an hour.  And I have to learn to live with it.

To be clear, I am managing it, admittedly some days better than others.  I don’t necessarily like the abundance of grey, but I am managing.  My resolution, however, is to embrace it, love it, appreciate it, look forward to it, wish it was greyer, in fact!  Wait.  Let’s not get crazy here…I just want to thrive – if even just a hint of grey better than I am now.  That is reasonable, right?  I can do that, right?  No black and white here!  No, sirree…in fact, I shun true black and true white.  Bring on the grey, baby.  Bring it on.

[i] You know who you are.  Thanks for the lack of judgment or criticism.  It was a good career move…I do not do well with either. ❤

[ii] This can be directly related to my having gotten an iPhone and going a little app happy.  I now get push notices every morning with my daily horoscope.  Like I needed another opinion chiming in at 6 a.m.

[iii] It worked.  She did, indeed, run a marathon.

Hey!  Remember me?  I used to blog fairly regularly, but then came Christmas vacation, and a trip to Vegas during which I managed to get sick (with, thankfully the cold thing and not the stomach thing) (and I can pinpoint exactly the not cute enough child who managed to cough and wheeze all over me for five hours) and then had work and life and, well…my apologies for the long absence.

The town we live in has a fantastic program called R.A.F. T.: Recreational Activities For Teens.  It is a brilliant idea: hold events for kids in grades 6-8 who live in town (no guests) as a way to develop new friendships and relationships as they near the time that the nine K-8 schools in town merge together into the single high school.   Among the most popular events are, not surprisingly, the dances.  Held at the high school (how cool is that when you are a 6th, 7th or 8th grader?) they are highly anticipated and attended.  Friday night was the first one for 6th graders and Jess was all over it.

This was a weekend that she was with her dad, and I will admit to being (not so) secretly relieved that I was off the hook when it came to getting her dressed, ready and to the ball.  The whole thing made me nervous, anxious, and a little bit more than slightly queasy.  I plied her with what I considered an appropriate number of queries leading up to the big day (Are you excited? Are other friends going? Did you want to go with a group of kids?) But no, she was cool and also as blasé as a kid vegging in front of the tv.  She amazes me.

I dropped her at Rich’s late in the afternoon and went home to make cookies: I was, apparently, desperately seeking comfort.  Around the time she was getting dropped off (alone, without a group of girls, or boys or, for that matter, anyone) I texted Rich to see how she seemed.  He responded that she was as cool as a cucumber, looked pretty with her light application of lip gloss and blush and was her trademark ballsy self.  He had asked her if she was feeling at all nervous to which she replied, “No…why would I be nervous” (as though it was the stupidest question ever asked) and proceeded to get out of the car, walk into the high school gym all by herself and, much like she did that first day of her transition at school, never look back.  He and I joked of the many reasons we thought she could/should/would be nervous.  None of them, it seems, occurred to her.  G-d bless that kid.

An hour or so into the dance, I texted Rich again: “Was everything okay? Had he heard anything from her?  Think she is okay?”  His response: Not a call, a text, a tweet, nothing.  Wow.  Impressive. (Aside: I remember how anxiety-producing those dances were for me back in the day…oh how I wish I had her confidence.)  And then, around the time I figured the dance would be letting out, I texted yet again.  She, I learned, had a great time, walked out with a gaggle of girls and cannot wait for high school.  Phew. Big sigh.  Huge relief.

I feel a little bit guilty for not being an active participant in her dance preparation.  I feel a little bit badly that I was relieved to have been “off the hook”.  I also feel, however, more than a little bit proud of her for having such confidence and strength and courage while I was wimping out in the corner.  Drinking wine.

So here, well into our third year of Jess being Jess I continue to marvel at what she is willing and capable of doing.  I still do not know how things are going to flush out, where she will land and how we will get there…but I do know that if anyone can handle this, it is Jess who is, perhaps, the ballsiest girl ever.