It’s become a lovely routine:  I wake (too) early, brush my teeth, throw on leggings, a tank and a light sweatshirt, brush my teeth, tie my hair up in a knot, head downstairs to put on my sneakers and I’m out the door.  First stop: Dunkin’ Donuts for a medium hot, one milk, one sugar, paid for with my always-loaded app.  And then I head to the ocean.

At that hour, the tide is beginning to go out, so the sand is firm and often teeming with rocks, shells, debris and, most importantly, sea glass.  It is all there just for a temporary visit before the tide comes in again and takes it all away.  Finding a piece is a random act, one which will never play out the same way twice. As I stack the morning coffee into yesterday’s empty and begin my walk/treasure hunt, earphones in, music blaring I open my eyes and heart to whatever may land at my feet.

It is strangely comforting and cathartic to find each and every piece of sea glass.  My expertise at spotting them has allowed me to be selective as to when to slow my pace, bend over and pick something up.  I used to grab every piece, aggressively going for quantity over quality, but am now more interested in the cool shapes and sizes that I happen upon, of which there are many.

Over the past few weeks, I have found almost entire necks of bottles, red pieces (most of which are, in fact, plastic bicycle reflectors which, I note with curiosity, seem to be in abundance at the shoreline) and more shades of green than I can count.  I’ve encountered entire bottoms of bottles, glass in various interesting shapes and even an occasional blue specimen.  My FitBit tells me that I cover four miles of sand, the ocean air clearing my head, as I drop the pieces into the extra cup, sand and all, each discovery and clink as it lands somehow joyful.

Yesterday, despite the fact that there are so many brown pieces that I often forgo them, I picked one up.  Its edges had been softened perfectly by Mother Nature, it’s shape somehow reminding me of a state on the map, although which state I am not sure.  I held it in the palm of my hand, paying it more attention than I normally do a ubiquitous brown piece, pushing the sand away, caressing it gently.  I noticed that it had lettering on it which I always consider a bonus, a bit of a thrill.  This one had just three letters: LAW.  No big deal, right?  Only here’s the thing: most of the brown pieces were former beer bottles, haphazardly discarded by partying beachgoers and there is no beer brand  that has those three letters: Budweiser, Miller, Michelob, Schlitz…yep, none spell LAW.  But, and perhaps you think this a stretch, my father was a lawyer.  To me it was a sign from him, although an ironic one as I don’t think he ever even tasted beer.  I took three more steps, smiling to myself, before I spied a small red, heart-shaped chunk.  No longer wondering, I was now sure that my father was with me on the beach. 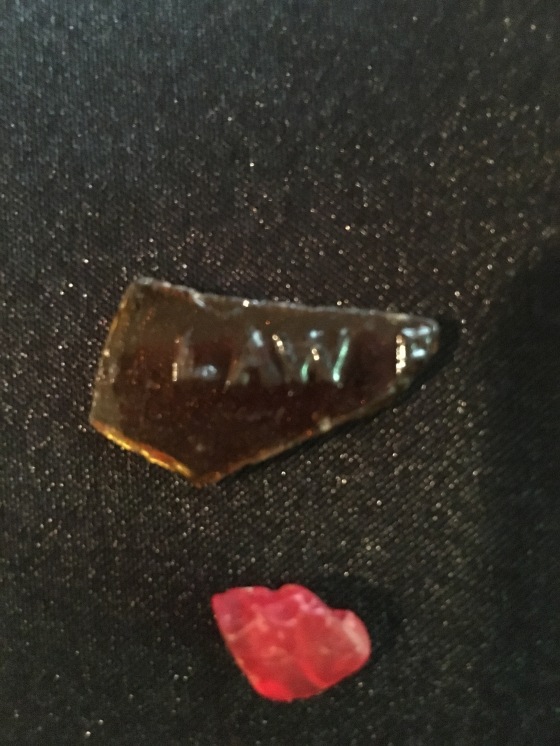 I am getting married in six weeks at my new home by the beach.  I am heartbroken that my father will not be there, so perhaps I am reading more deeply into the softened shard on the sand, but I don’t think so.  I know that he is here.

Happy Father’s Day to the best.

7 thoughts on “LAW and My Dad”