Even from a distance, it was impossible not to notice her frenetic energy, long black hair flying behind her as she jumped and danced excitedly by the ocean, iPhone in hand, much the way a puppy would react to the expanse of sand there for the taking.  With the ocean as their backdrop, she was zealously positioning the three women she was with for a photograph which, if I were a betting girl, was likely  posted to social media within moments of capture.

As we approached her, we narrowly avoided being  knocked to the ground, but in the sweetest way possible.  Barry offered to take the picture so that she could be in it and she enthusiastically and gratefully took him up on his offer.  The four women, all with the same black hair were clearly related with their shared ebony eyes, small stature and broad smiles.  It was Eliana, however, with whom we struck up a conversation while her companions – her daughter and nieces – patiently waited for her to join them in the photo.  As they clustered together, pure joy emanated from all of them.  Their love of life and one another was undeniable.

She presented as over-caffeinated, but not unhinged.  Frenzied and energetic, but delightfully so.  Emotive, expressive and wise…and in the most endearing way ever.  Yes, Eliana had an entirely adorable and endearing personality, but more noteworthy: beyond her exuberance, she was thoughtful, articulate and wise.

Her particulars: she emigrated from Guatemala to a working class town just north of Boston when she was 19, has one child, has been working for the same family in an affluent community as their house manager/nanny for fifteen years, has proudly never taken a dime of government money, has raised her daughter to live the American dream and she, like no one I’ve ever met, lives life to whatever is beyond “the fullest”.

Moments before we met, I’d received a breaking news alert on my phone: “Protester Fill Boston’s Copley Square in Opposition to Trump’s Refugee Order.”  The city, whose skyline we could see from where we stood at the shore of the resplendent Atlantic Ocean, had erupted with anger; immigrants and American-born men, women and children banding together in their mutual condemnation of the recently signed executive orders.  It was impossible to not ask Eliana how she felt, what she thought.

A spectacularly proud and joyful American citizen, she was remarkably purposeful, insightful, cerebral even, about what was happening in her adopted land.  In her excitement, she vacillated between English (which she spoke perfectly) and Spanish (Barry having established that he, the son of Chilean immigrants, understood her native tongue.)

But she is keenly aware that others in her community have not acclimated and adjusted as well as she has.  For those people, she carries extra toothbrushes, socks, gloves and other items for people who are, in her words, “Ella tiene menos suerte que yo.” (“Less fortunate than I.”)

Eliana, who, at 45 years old looked more like her daughter and nieces’ sister than mother and aunt, was kind, gentle, grateful, appreciative and proud.  She complained about nothing…except the fact that she doesn’t have a boyfriend…and her feeling on that subject was more bewildered and dumbfounded than bitter.  In fact, she has such tremendous self-confidence that she was almost incredulous as to why the men aren’t pounding down her door…and was utterly charming about it.

We stood seaside warmly chatting for a solid 30 minutes.  I told her that I am a writer, loved her story and would she pose for a quick selfie?  Well, that was a stupid question: she jumped between us, plopping herself comfortably in Barry’s lap.

Perhaps the most poignant moment, however, was just before we parted ways and, for the first time, Eliana revealed her vulnerability in this hug, which she so clearly embraced. 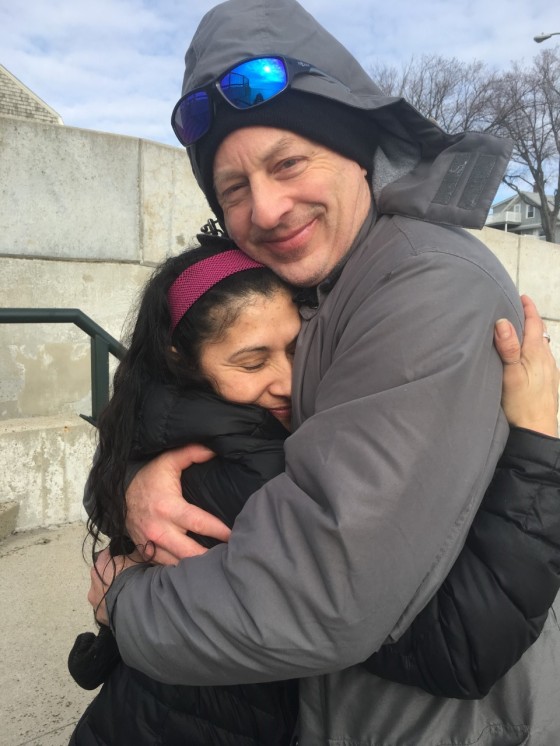 We are all the same.

Strike up a conversation with a stranger – everyone has a story.

Listen to someone – everyone lugs around some loneliness.

When you see someone taking a photo of their companions offer to take it for them – everyone wants to be included.

You never know who you will meet along the way – everyone starts off a stranger.

6 thoughts on “We Are All The Same”